Airs on WSFM-LP 103.3 in Asheville / streaming at AshevilleFM from 3am EST on July 22nd through July 29th, 2019 and podcasting on libsyn.com. 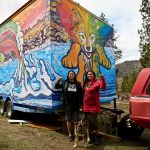 This week, we feature two segments on the episode. First, a brief chat with Duncan of Perilous Chronicle, a site documenting prisoner resistance since from 2010 til today in the so-called U.S. & Canada. More on that project can be found at perilouschronicle.com and you can find them on twitter as @perilousprison.

Then, we spoke with Kanahus Freedom, from the Secwepemc  and Ktunaxa nations, who is involved in the Tiny House Warriors struggle against the Trans Mountain Pipeline threatening the sovereignty and health of unceded Secwepemc land. Kanahus is also decolonization activist and a mother. We talk about birthing and parenting outside of the scope of Canadian colonial government, the role of construction “man camps” in genocide, and how to help struggle against TMX.

Kanahus also contributed the essay “Decolonization: The frontline struggle” to the book “Whose Land Is It Anyway: A Manual for Decolonization.” Here is Kanahus reading the words of her father, Art Manuel, in marking 150 years of resistance to the Canadian state.

The Trans Mountain Pipeline (TMX) will play a role in the wider genocide of indigenous people through the proliferation of so-called “Man Camps” as well as destroying the integrity and health of indigenous health. Some of these topics are touched on in the recently published Final Report of the National Inquiry into Missing and Murdered Indigenous Women and Girls (MMIWG). The pipeline was purchased from Kinder Morgan by the Canadian Government of Justin Trudeau so they could push it through within a week of the widely publicized Final Report located above. We also interviewed

Anarchist prisoner Sean Swain recently got most of his items sent to him (albeit many damaged) from the jailers in Ohio where he was held for most of the last 28 years, which is a partial success. He still hasn’t gotten the items he’s bought and paid for on the JPay digital account that handles his emails, and other digital media. So, if you used to email with Sean and haven’t heard from him for a while, check out his website for his current number and drop him a line as he likely doesn’t have your address or past messages anymore, until people pressure JPay to transfer property from his old JPay account number to his new number. This includes nearly $1,000 in digital music, purchased and held online in a way similar to purchasing online from Apple music, only from this company that profits from prisoners and their loved ones. Also, anyone writing to Sean Swain should know that the Virginia rules for snail mail say that he can only receive up to 3 pages front and back (whether letters or photocopies) in an envelope, so if you’ve been writing him and getting mail turned back, consider sending more envelopes full of smaller letters!

You may have recently seen news coverage of protesters, largely Indigenous and elder, opposing the construction of a Thirty Meter Telescope, or TMT, on Mauna Kea, a mountain on the Big Island of occupied Hawaii. This mountain is over a million years old and, when measured from its underwater base, is the tallest mountain on the planet. The university of California and University of Hawaii are currently attempting to build this TMT on the land, and Indigenous people along with students of both universities have been resisting this and similar efforts.

This is just one instance in the long project of settler colonialism, 14 telescopes have been built on the Mauna from the years 1968 and 2002, efforts which have threatened the stability of the ecosystem and harmed a place of great spiritual significance for the Indigenous people of Hawaii. The people were not consulted in any part of this development process and have been resisting these construction efforts at every point from the earliest days. The most recent of these, the TMT, would dig a total of 7 stories down into the mountain, contaminating a sacred water source and disturbing the burial places of countless people. The current efforts against the TMT are already being likened to the resistance at Standing Rock, and over a dozen people have already been arrested by cops protecting the interests of the state and the university. As it stands now, it was stated that construction on the TMT would begin, and the Governor of Hawaii has declared a so called “state of emergency” in response to the defense of the mountain. Extra police and National Guard have been brought to the mountain to attempt to quell this resistance. Now more than ever, solidarity with those fighting for their sacred lands is paramount! To see much more information than we were able to include here, including history, analysis, a FAQ section, an open letter from students to the Universities, as well as ways to support/donate you can visit protectmaunakea.net.

Joseph Stewart, aka “Shine White” has been transferred is the Deputy Minister of Defense
White Panther Organization NC-Branch who was punished for his call for prisoners to unite across factions to participate in the 2018 Nationwide Prison Strike. He was moved around and put into solitary for this call and for writing about witnessing guards allow a mentally distressed prisoner to burn himself alive in a cell. Shine White has been moved and could probably use some caring mail. His new address is::

Kevin (Kinshasa) Cox, #1217063, is a Mentor and Student with the W.L.Nolen Mentorship Program, and also a party member with the New Afrikan Black Panther Party/Prison Chapter. He’s been locked up in the ‘hole’ for what seems to be a contrived charge to endanger Mr Cox’s safety and throw him into the hole. By way of backstory, it seems that Mr Cox’s door was malfunctioning and CO’s went over to check it. After securing the door, Officer Ricker attempted to manufacture evidence of Mr. Cox attempting to assault the CO, an incident that would have been caught on tape. Instead of check the security footage, admin is taking Officer Ricker’s claim of an attempted assault and has stuck Mr. Kevin “Kinshasa” Cox in segregation. It is requested that listeners concerned with Mr. Cox’s access to due process and safety contact the following NC and Scotland, Correctional Institution officials to lodge complaints and check on the safety off Mr Kevin Cox. More details will be released soon as we get them.

Music for this episode is in our playlist and includes: